Last night I dreamt I was flying over Akureyri. I was flying very high at first and could only see mountains and valleys, then came down slowly, descending in large circles over snow and water. Sometimes it was just like the satellite photos on Google Earth, sometimes it was just a white plain near the ocean. I was going down very slowly and I could notice several features of the landscape. I saw the saphire lake among the hills covered with pine trees south of Tangiers in Morocco, I saw the green and damp fields near Santarém where I ran away from the wild bulls, machine gun in hand, when I was a recruit in the army.

Suddendly I was already in the town, flying low and fast among the brightly coloured houses that seemed to be scattered almost randomly, red, light blue, yellow, white. The streets were covered with snow, but it wasn’t real now, it was a white powder that seemed like flour and it raised small clouds beneath my feet as I was flying standing up. I was exploring all streets, always turning to the left first, like if I was playing Doom. All the streets where empty, no people, no cars, no trees. All the buildings were like closed boxes and seemed to have no purpose, but were bright and perfect and new.

“I am getting near the water”, I thought, because I was feeling more and more cold and my clothes were getting wet. I went across a large muddy empty place and then I was flying across the ocean. The ocean was flat and perfectly still and the water was light blue, almost white. As I moved over the water I began to be afraid that I would stop flying and I would drown immediately. Soon I was in panic, but I could do nothing and was flying straight ahead faster and faster. Then something happened, I can’t remember what, and I was again very high, looking down, motionless, trembling.

After that I dreamt about footbal players and drugs and I woke up laughing. [ovst pqnna?] 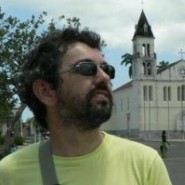